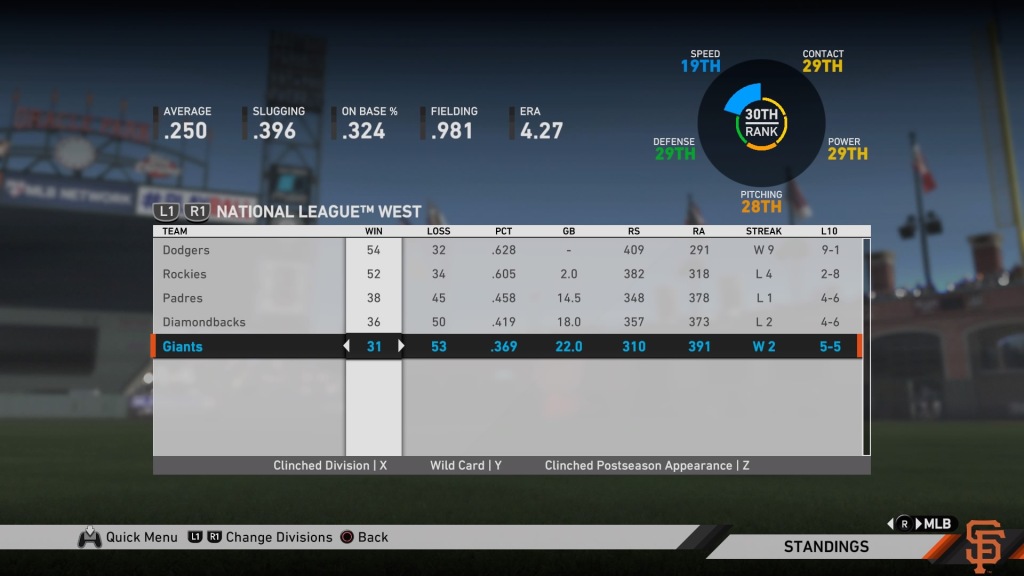 June was not a great month for the Giants. If you want to catch up on the season so far, click the links below:

Another terrible month for the Giants who finished the month with a 10-17 record – putting them at 31-53 on the season. Our organization is now 22 games back of the division leading Dodgers. It is safe to say that playoffs are not in our near future. We will be unloading players at the deadline.

The River Cats started the month with a 10 game losing streak. They were only able to collect 10 total wins on the month while losing 17. This brought their season record to 36-47. The Cats are in last place in their division – 9 games back of first.

The Flying Squirrels were 14-14 through the month of June- bringing them to a 43-37 record on the season. The Squirrels are tied for the division lead with the Eerie SeaWolves.

We are getting a pretty solid season from Pablo Sandoval so far. He is hitting for average and power – this is a nice surprise.

Looks like I made a solid pickup in Jose Mesa – who had a great debut month for our organization. Matt Beaty was also swinging a hot bat through the month of June.

George Kirby struggled this month – although I am not too concerned, I expect him to bounce back just fine.

Alex Manoah is a strikeout machine – I have high hopes for him in the future. Brice Turang has been a consistent bat for the AA Flying Squirrels.

As we enter the month of June, things have changed in the Top 50 Prospects list. Here is where things stand:

Some players within the organization found themselves at new spots on the MLB Top 50 Prospects list. Here is where I would rank the prospects within our system after a month of baseball:

I will breakdown July, as well as all of the All-Star festivities that happen during the month. We will also trade anything we can not that we are completely out of the playoff picture.