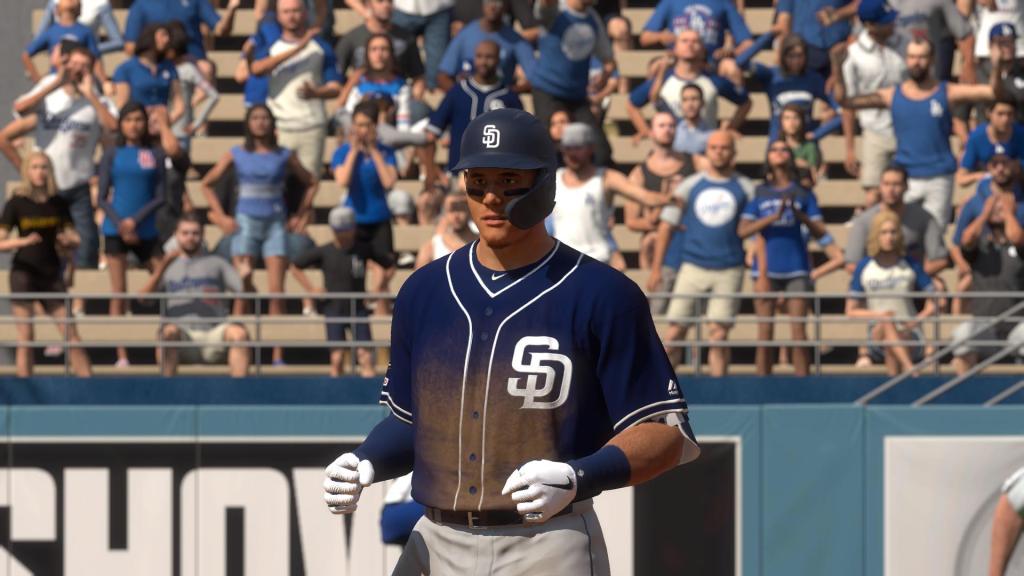 We did it. We made it to the postseason. The Padres turned into a contender in less than a season. Does the team have what it takes to beat a perennial postseason disappointment – The Washington Nationals – in the Wild Card Game? Let’s find out.

The Nationals jumped to an early lead thanks to a leadoff single and stolen base from Trea Turner. Juan Soto was able to drive him in with one out to put the Nats up 1-0.

After that inning, Noah Syndergaard settled down and shut down the Nationals offense. With the help of Machado’s glove – Syndergaard only allowed one hit through the next four innings.

In the midst of our pitcher’s duel – the Padres got their first hit off the bat of Ender Inciarte in the bottom of the 5th innings.

The bats came alive for the Padres in the 7th inning. Manny Machado and Christian Yelich started things off with back to back singles. Josh Bell was up next and loaded up the bases with a single of his own. Gary Sanchez rolled over into a double play on the next at bat – but the run scored – tying the game at 1-1.

Hector Rondon came in for Syndergaard in the 9th and shut down the Nats in order.

In the bottom of the inning – Machado reached on a single. Yelich followed that with a grounder to the shortstop – one in which the Nats made and errant throw on allowing both runners to reach base safely. Josh Bell was up next and flew out to left field. With two on a two outs – Gary Sanchez drove the ball off the wall in right field. Machado scored and the Padres won the game 2-1.

Noah Syndergaard was a stud on the mound. He lasted 8 innings – allowing just 3 hits and 1 run while striking out 8 batters.

For the Division Series we had to take on our N.L. West rival, the Los Angeles Dodgers.

The Padres come into this series in the midst of an 8 game winning streak.

The Padres were able to put a threat together in the top of the first. Manny Machado and Christian Yelich were both able to single, but Gary Sanchez and Josh Bell were unable to capitalize.

With two outs in the bottom of the second A.J. Pollock started the scoring for the Dodgers, hitting a solo shot to left field just over a leaping Hunter Renfroe at the wall.

Mike Clevenger and Jeff McNeil led off the top of the 3rd with back to back singles. Machado rolled over into a double play and Yelich struck out, ending the threat.

With two outs in the bottom of the 4th the Dodgers had Justin Turner on 3rd with two outs. Clevenger challenged Pollock inside – and Pollock launched his second homerun of the game – putting the Dodgers up 3-0.

The Padres came out swinging in the top of the 5th. Ender Inciarte and Fernando Tatis Jr. started off the inning with back to back singles. Clevenger then bunted – moving Inciarte to 3rd and beating out the throw to first on a potential double play. McNeil stepped in and drove the ball to center field – scoring Inciarte from 3rd.

The Dodgers decided to leave Kershaw in after a brief mound visit from Rick Honeycutt. Machado was up next and finally started to earn some of that $30M salary – he drove the ball off the wall in left-center field, scoring both runners and tying the game at 3-3.

The Dodgers got their lead back the following half of the inning. Corey Seager hit a ground rule double with two outs. Shane Peterson drove him in with the dinkiest little slow roller up the middle to grab the 4-3 lead.

In the bottom of the 6th the Dodgers knocked Clevenger from the game. After a leadoff walk to Cody Bellinger, Clevenger left a slider over the middle of the plate, and Max Muncy drove it over the left field wall to extend the Dodger lead to 6-3.

The Padres started the 7th off with a leadoff double from Tatis Jr. Matt Duffy – who pinch hit for the pitcher – and McNeil both lined out to Bellinger in right field. Machado then rolled over, ending the inning.

The Dodgers brought in Adam Liberatore to pitch the 8th. This was a mistake. Yelich led off the inning with a single. Gary Sanchez then drove the ball into the hitter’s eye in dead center field to bring the score to 6-5.

Max Muncy started off the Dodgers half of the 8th with his second homerun of the game – extending their lead to 7-5.

Kenley Jansen came in to pitch the 9th for the Dodgers. He retired the first three batters he faced to seal the victory and grab the 1-0 series lead.

The Padres bounced back and defeated the Dodgers 10-1. Jeff McNeil led the offense, going 4/5 with 5 RBI and falling a triple short of the cycle. Ender Inciarte also collected four hits on the day. Marcus Stroman went 7.1 IP allowing just 4H and 1ER while striking out 7.

The Dodgers took home the victory 5-1. They were able to secure the win with the help of homeruns from Justin Turner, A.J. Pollock and Austin Barnes. Ryu went 8 scoreless innings on the mound for the Dodgers. Chris Paddack struggled for the Padres, giving up 5 ER in just 4 innings of work. Manny Machado led the Padres with 3 hits.

The Padres decided to give Noah Syndergaard the start over Kenta Maeda in game four of the series. Unfortunately, the Dodgers still took home the 4-1 victory and won the series 3-1.

We will head into the offseason. We put together a solid squad – but it wasn’t enough to reach postseason glory. How different will the roster look in 2020?